Harvest Wrap Up and Our Connection to King Charles High five! Harvest is done. I cannot tell you how proud I am of our magnificent vineyard team. (Read our start of harvest post)

Nor can I downplay the challenges. 115 degrees on Wednesday, September 7, just as we were beginning to pick Chardonnay for still wine.

The whole harvest was unpredictable from day one. Case in point: “Q”, voted vineyard block least likely to succeed this vintage, ended up being best of show – both in quantity and quality. We probably have enough for 150 cases, when 50 cases is (or was) the norm. The flavors have always been great, but the soils on that vineyard block retain next to no water. We assumed yield would dip lower… not increase three-fold, while other, more reliable blocks did not fare as well.

We lucked out with our microclimate and cool foggy mornings again this year, and because we are principally a Sparkling Wine house, we could bring in the grapes before the extreme heat. Even on the worst day, we were in the vineyard at sunrise and quit at 10am before it got too hot.

Fun fact: This harvest (for us and I hope others) was bracketed by two full moons. We started August 10. Our last day coincided with the Harvest Moon. It may or may not mean anything, but it is very romantic.

Iron Horse and our History with King Charles

This summer has been an extraordinary time for going through the archives of Iron Horse White House menus and finding our connection to King Charles.

Our ties to the White House began with the decisive Regan-Gorbachev Summit Meetings in 1985.That dinner in Geneva put Iron Horse on the map. The historians agree that the two superpowers were poles apart until this toast. Ever since, my family has taken credit for ending the Cold War. Ted Turner thinks he did it, but, no, it was Iron Horse.

We were saddened to hear of Mikhail Gorbachev’s passing on August 30th. He figures so largely in our history. That moment changed the trajectory of the winery.

The wine was Iron Horse 1982 Blanc de Blancs – notable because our first vintage of bubbly was 1980, and Blanc de Blancs seems so appropriate, especially paired with Pear Sorbet “La Colombe”, which means “dove” in French, for a toast to peace.

We were honored to have our wines served when the Obamas entertained the Queen at Winfield House, the US Ambassador’s residence in London. Iron Horse Russian River Cuvee was the toasting wine served with Classic Pecan Pie and Brandy Ice Cream.

The White House traditionally serves Sparling Wine at the end of the meal with the toasts. For (then) Prince Charles, the Bushes chose Wedding Cuvee as Charles and Camilla were newlyweds at the time.

Then, in 2019, at Winfield House for (now) King Charles, the toasting wine was Joy! in magnum.

I am very proud that our friend Duskie Estes led a group of Farm to Pantry gleaners here mid-September. We picked 590 pounds apples, pears, and Asian pears – the equivalent of 2,400 servings of fresh fruit for those in need. We finished with chilled 2018 Harvest Moon, carrying on a wonderful tradition, sharing the bounty of the season. 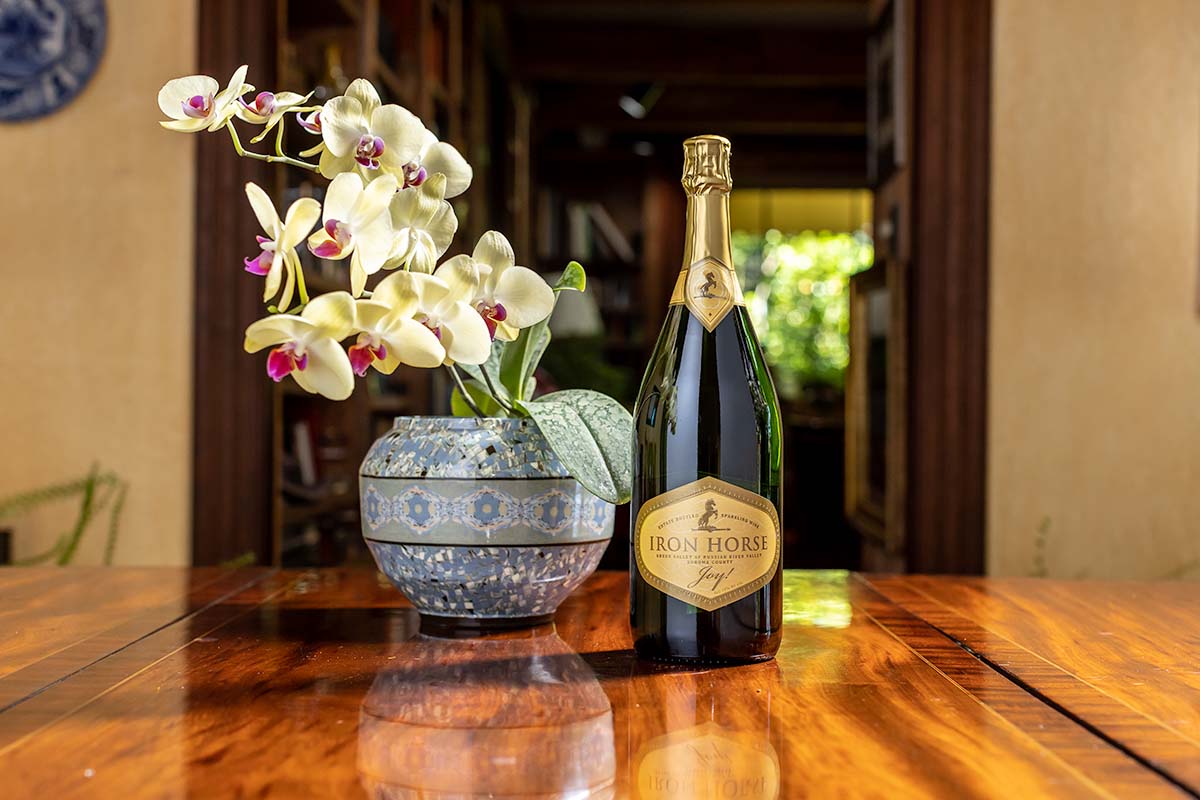